This is the first official day of  daily creativity.   I wish it had been a day filled with creativity but it really wasn’t.  I did Sunday things that I needed to do. Finally, late in the afternoon I had a half hour to sit outside and work on a knitting project. I have to say that half hour was the best!  The sun was bright and warm and it felt great. During my short time knitting I was able to be totally present and only think about that moment. I suddenly heard all the sounds around me (dogs, birds, cars, airplane, wind chimes), smelled the smells (the sweet smell of hyacinth) and saw my backyard (forsythia in bloom, grass getting very green, blue sky).  It recharged me. The knitting was a little frustrating because I was working in the round and realized that it was twisted so I ended up having to take out a few rows to fix it. I didn’t really care, though. The knitting was really just an excuse to relax. Knitting is good for that.

I’m making a felted bag.  I was addicted to making these bags for a while. I had to sell them to support my habit. I finally got tired of them and I have a bunch of left over wool that I want to use up so I’m back to knitting bags again. I made a rule that I can’t buy any more yarn so the color combinations aren’t always exactly what I’d like. its an interesting exercise though. I always say we see all color combinations in nature so all colors go together.  I guess I’ll see if I’m right.   The pictures below are not exactly what I’m working on now. They’re examples of a couple of felted bags I made a few years ago. I’ll include a picture of the current project once it looks like something. 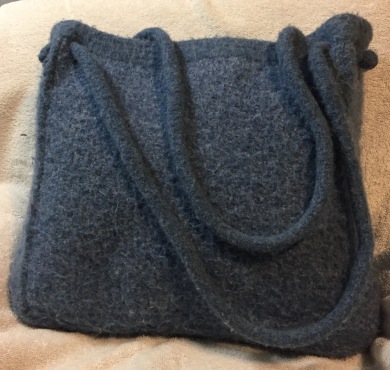 What creative things did you do today ? Take a few minutes to make a list. Post it in the comments if you want.